Every 11 seconds, a girl in the world is cut. Every third girl dies as a result of FGM and many suffer a lifetime of both physical and psychological trauma.

The World Health Organisation (WHO) has defined female genital mutilation as comprising “all procedures involving partial or total removal of the female external genitalia or other injury to the female genital organs whether for cultural or other non-therapeutic reasons.”

FGM is performed on women and girls at a range of ages including babies. In some cultures FGM is performed to curb a young woman’s sexuality from a young age. As she grows the permanent trauma done to her sexual organs results in a range of physical, psychosocial and social problems as a survivor. There is no medical reason for the procedure which can result in infections, shock, bleeding, chronic pain, reproductive issues and death.

FGM is practiced globally on every continent except Antarctica and including western countries such as Australia, the USA, the UK and Europe. FGM is a violation of human rights and is illegal in all states and territories of Australia.

Are Australian girls at risk of FGM?

At this point there is no government data collected about female genital mutilation. However NoFGM Australia estimate that 11 girls a day are at risk in Australia. It is wrong to assume that if girls do not present with acute genital injuries that FGM is not happening in Australia. It is also wrong to assume that because someone comes from an FGM affected community that they will subject their daughter to FGM however those girls are still in the highest risk group.

The figures were calculated by combining the latest available international survey data with Australian population estimates for 2017. Prevalence rates of female genital mutilation by country were available for only 29 countries although it is known to be practised more widely, which means the figures might underestimate the issue.

Among women and girls living in Australia but born in the countries used in the report calculations, the female genital mutilation rate was estimated at 452 per 1000 or 45%. Girls and women aged 15-49 accounted for more than half (57%) of those with female genital mutilation in Australia. The report estimates do not include second generation girls and women – those born outside the countries used in the analysis but whose parents were born in those countries.

“Evidence from other countries suggests that some families have female genital mutilation done while girls are visiting the country of their parents’ birth” the report said.

There have also been a couple of legal cases in Australia involving people being accused of female genital mutilation or arranging for it to be conducted. While the report describes the figures as “rudimentary”, they provide insight into the potential extent of female genital mutilation and can assist healthcare and community service providers to ensure appropriate care is available.

This report from the Australian Institute of Health and Welfare reinforces the call and importance of all healthcare practitioners being familiar with issues pertaining to female genital mutilation to ensure survivors are appropriately supported.

A survey of Australian based paediatricians found that 23 clinicians has seen 59 children with female genital mutilation in the previous five years in their practice in Australia. While 90% were identified via refugee screening and were born overseas, three (10%) were born in Australia, two of whom had the practice done in Australia where it is illegal and one in Indonesia.

The complete typology with sub-divisions is described below:

Type I— Partial or total removal of the clitoris and/or the prepuce (clitoridectomy). When it is important to distinguish between the major variations of Type I mutilation, the following subdivisions are proposed:

Type II— Partial or total removal of the clitoris and the labia minora, with or without excision of the labia majora (excision). When it is important to distinguish between the major variations that have been documented, the following subdivisions are proposed:

Type III— Narrowing of the vaginal orifice with creation of a covering seal by cutting and appositioning the labia minora and/or the labia majora, with or without excision of the clitoris (infibulation). When it is important to distinguish between variations in infibulations, the following subdivisions are proposed:

Type IV — All other harmful procedures to the female genitalia for non-medical purposes, for example: pricking, piercing, incising, scraping and cauterisation. 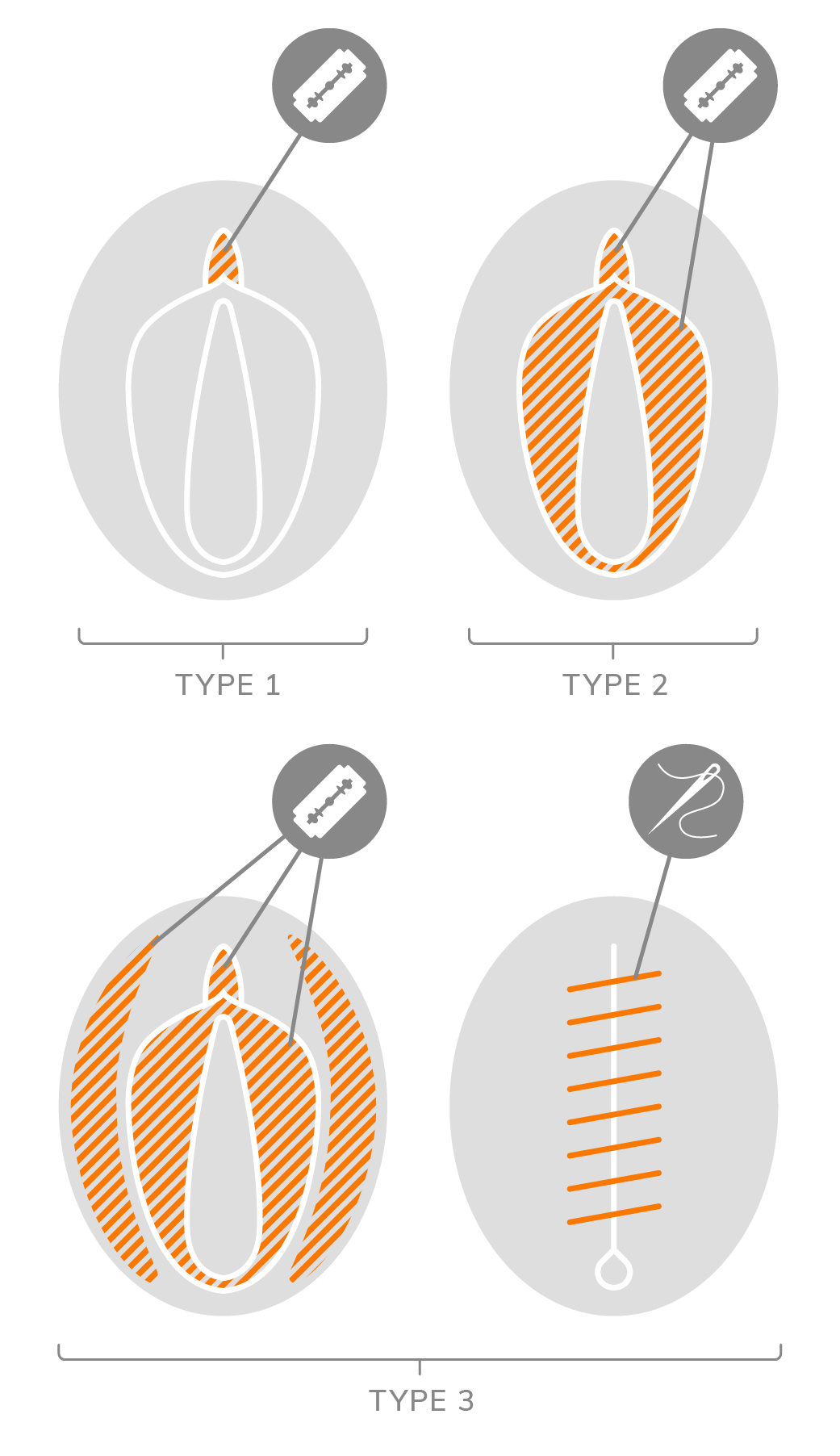 FGM is a criminal offense in Australia. If you suspect that a child may be in danger of having FGM performed you need to report it to the police or the relevant child protection agency for your state.

VICTORIA
Child protection in Victoria after hours number to call is: 131278